TDCAA Community
New Cause of Crime
This topic can be found at:
http://tdcaa.infopop.net/eve/forums/a/tpc/f/157098965/m/9871076912
JB
New Cause of Crime
Ray Lewis thinks if the lockout continues and there is no NFL season, crime will increase because people will be so distraught without one of their favorite past times. 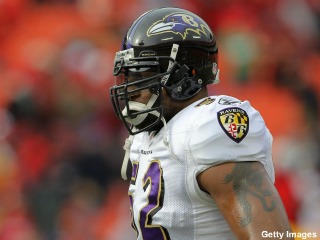 [What do you think?]
A.P. Merillat
Oh, I don't know; there's always Andy Griffith reruns.
GG
Speaking of Andy Griffith, has anyone ever heard his hilarious comedy routine called "What it was was Football"? I have it on a 45 from the 60's and it's a country boy describing the first football game he's seen.
andersondamisd
Without football all weekend, more people will be bored and restless. People who are bored and restless are more likely to get out of their homes and meet up with other folks and get into trouble. I can see this being a reality.

There are some studies which suggest that videogames actually contribute to fewer crimes happening because they occupy the time of folks who might otherwise be out partying, drinking, graffiti-ing, stealing, etc.
JB
"Thus far, many bloggers and others have laughed at Lewis' comments. Considering his size and hitting ability, we won't. Still, we decided to be game and, as Lewis advised, do some research. We tried to talk to the former Super Bowl MVP or one of his representatives, but our efforts were unsuccessful."

[This message was edited by JB on 06-21-11 at .]
Gretchen
Another cause: gender ratio imbalances

"Historically, societies in which men substantially outnumber women are not nice places to live," she writes. "Often they are unstable. Sometimes they are violent." As examples she notes that high sex ratios were at play as far back as the fourth century B.C. in Athens�a particularly bloody time in Greek history�and during China's Taiping Rebellion in the mid-19th century. (Both eras featured widespread female infanticide.) ...

There is indeed compelling evidence of a link between sex ratios and violence. High sex ratios mean that a society is going to have "surplus men"�that is, men with no hope of marrying because there are not enough women. Such men accumulate in the lower classes, where risks of violence are already elevated. And unmarried men with limited incomes tend to make trouble. In Chinese provinces where the sex ratio has spiked, a crime wave has followed. Today in India, the best predictor of violence and crime for any given area is not income but sex ratio.

Unnatural Selection
Terry Breen
Isn't "The Bored And The Restless" the name of a popular soap opera? It has a familiar ring to it, so that's why I ask.
L.D. Bloomquist
Ray knows a thing or two about crime from his days in the criminal justice system.
Fred Edwards
I have to agree with this gender imbalance thing Gretchen�for many years now I have lived in a household with four women and I find that periodically the atmosphere at home becomes very inhospitable to the point where my son and I just have to leave and find a place where we can sit down and watch a little football in peace.
Terry Breen
Gretchen, that article you linked to is pretty sobering. Another unintended consequence of when people play God.